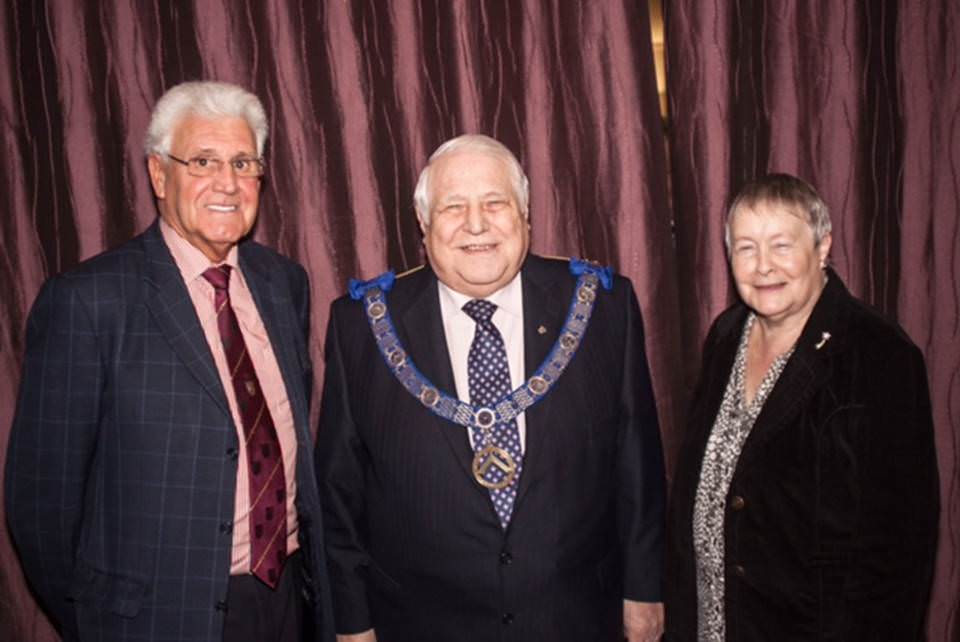 Deputy Provincial Grand Master, Derek Thornhill with his wife Joan and the Chairman of the Association, Malcolm Warren

Ecclesholme Christmas Fair – raising funds for the “Residents’ Amenity Fund” for the residents at Ecclesholme.
This year the Committee were delighted that Deputy Provincial Grand Master, Derek Thornhill accompanied by his wife Joan were attending and the fair was officially opened by the Deputy Provincial Grand Master.
The fair was well attended even though there was a Christmas Fair being held at Hewlett Court and a large number of East Lancashire brethren were supportive of their ELMC Home.
The profit made on the day was  £1,530.00 and was thankfully received and will be faithfully applied. The thanks on behalf of the Association is to be extended to the Committee members, Home staff and the Eccles Hall Manager along with members of the Eccles group who prepared the tables for the fair.
Once again the Committee are indebted to the Greenall Brass Band, who again gave wonderful entertainment both at the fair and then afterwards over at the Home.
Finally, the Committee would like to express their thanks to the brethren, wives, partners and children who were again most supportive of our fund raising event.

Presenting the bouquet of flowers to Joan Thornhill is President of the Association of Friends Mark Stephen Gregory.

Many thanks to all supporters!