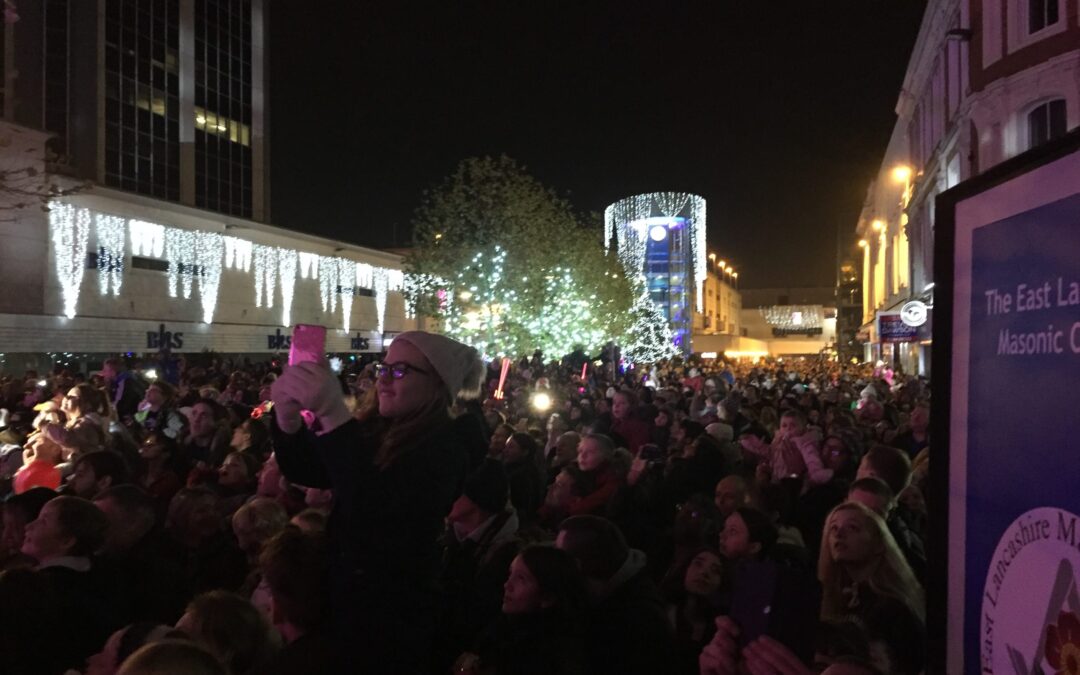 Christmas got off to a great start in Blackburn Town Centre on Saturday 26th when celebrities, local artists community groups and Charities all came together to celebrate the beginning of Christmas.
Actor Jack P Shepherd, aka David Platt from Coronation Street, switched on the lights with Mayor Cllr Akhtar Hussain and launched a wonderful fireworks display for the thousands in attendance on King William Street to enjoy.
Our presence and support was given firstly by the ELMC, who awarded a grant for the hire of the Jumbo screen on the stage where messages of  information, including our support were displayed in the event and at the build up for hours before.
The Provincial Trailer was parked right in the middle of the event, adjacent to the main stage. This was used as a registration point for the VIP’s, a community presence and information point on Freemasonry and as a balloon inflation station! Our District volunteers blew up and distributed hundreds of balloons to the children of families attending the event, all carrying our message.
The many District volunteers, in addition to blowing up balloons, worked with Alzheimer’s UK, walking amongst the crowds with buckets to raise funds for this most pertinent of Charities. Pertinent because one of the main guests was the ‘Song a Minute Man’ Ted McDermott, who was a recent internet sensation on YouTube. Ted, a gifted vocalist and performer for many years, is a sufferer of Alzheimer’s. His son Simon videoed them both travelling in the car around Clitheroe singing, as this is one of the only times Ted becomes his old self again. The video has been viewed millions of times and through their efforts, they have managed to raise over £150,000 for Alzheimer’s UK so far! Ted took to the stage and sang us two wonderful songs, including ‘You make me feel so young’. A wonderful and memorable performance for all who were lucky to be there.
Other performances included local dance schools, singers, Chloe Rose, Birchall and Britains Got Talent favourites ‘Boogie Storm’.
We were even called upon to help a young boy called Dylan who had become separated from his Mum in the huge crowds, thankfully quickly reunited after an announcement from the main stage.
A great community event, supported Provincially and delivered locally! Grateful thanks to all volunteers and co-ordinating crew for their support.

The following has been received from Harriet Roberts of New Ground Together who applied for the ELMC Grant
Thank you to everyone in your team for helping to make Saturday such a fantastic Lights Switch On event – the best Blackburn has seen for years. As always, your members were a cheerful and professionally efficient team to work with and this helped to make the event safe and secure for all our acts, volunteers and guests getting to and from backstage into the town hall and operational area.
Without your support we simply couldn’t have managed the delicate situation with Ted McDermott’s unstable health condition and his ability to perform. As it was, on the night, the blessing was that he was in terrific form and the star of the show. The big screen which ELMC funded not only enhanced his performance but added professionalism and impact to a fantastic show to a capacity crowd of what must have been about 5,000 people do you think? Thanks again for that donation of £1500.
I do hope that the event was a success for your people as well and that you had an enjoyable evening.