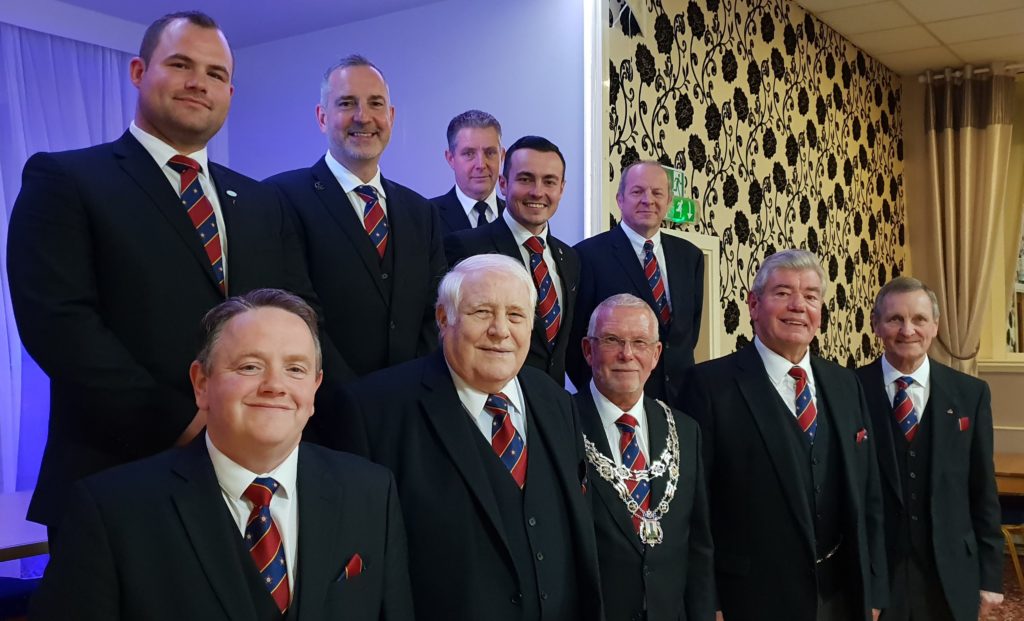 On October 1st Peaceful Valley Lodge No. 4111 held the latest hosted meeting in the presence of The Provincial Grand Master, RWBro Sir David Trippier and a deputation of Grand and Acting Officers of the Year.
Once the normal business had been concluded, the Provincial Grand Director of Ceremonies WBro Dr. Simon Archer led the deputation into the Lodge whereupon Sir David accepted the gavel and occupied the Master’s Chair. He thanked everyone for their attendance and expressed how important it was to support such events. He also expressed delight at the prospect of meeting the Brethren and especially those he had not previously met before. The main event of the evening was a presentation by five Junior Brethren from Lodges across the East Ribble District entitled, ‘The Ashlars’ The presentation which told the allegorical tale of the Ashlars and how they relate to the man as he progresses on his Masonic journey, was expertly and confidently delivered to the delight of the assembled. Following the presentation, Sir David congratulated the presenters and admitted he hadn’t seen this particular lecture before and said how it should be replicated across the Province.
The presentation was delivered by the following Brethren:
Bro Phil Fitzsimmons – Peaceful Valley Lodge No. 4111
Bro Tom Nicholson – Bank Terrace with King Oswald Lodge No. 462
Bro Carl Allan – Bank Terrace with King Oswald Lodge No. 462
Bro Will Atkinson – The Lodge of Amity and Rossendale Forest No. 283
Bro Ashley Wright – Perseverance Lodge No. 345
Following the collection, The RW Provincial Grand Master and his deputation retired from the Lodge. The Festive Board was a joyous occasion. In his response, The RW Provincial Grand Master again thanked the Lodge and the Presenters for a wonderful evening before continuing to say how the Tercentenary Year had seen a renaissance in Freemasonry, particularly with younger Brethren who he said needed to be nurtured through their Masonry. He went on to tell a couple of stories, one of which included the purchase of a racing pigeon in Bacup named Concorde, to the delight of the Brethren. District Chairman WBro Dave McGurty proposed the toast to the Lodge and the Worshipful Master. He expressed his thanks at the support given to the Lodge, especially from fellow Lodges sharing the same Masonic Hall. He also reminded everyone that 2020 sees the Centenary of Peaceful Valley Lodge, a real achievement which everyone was looking forward to celebrating. The Worshipful Master WBro Frank Mellor kept his response short by thanking WBro McGurty and presenting Sir David with a cheque for the ELMC.