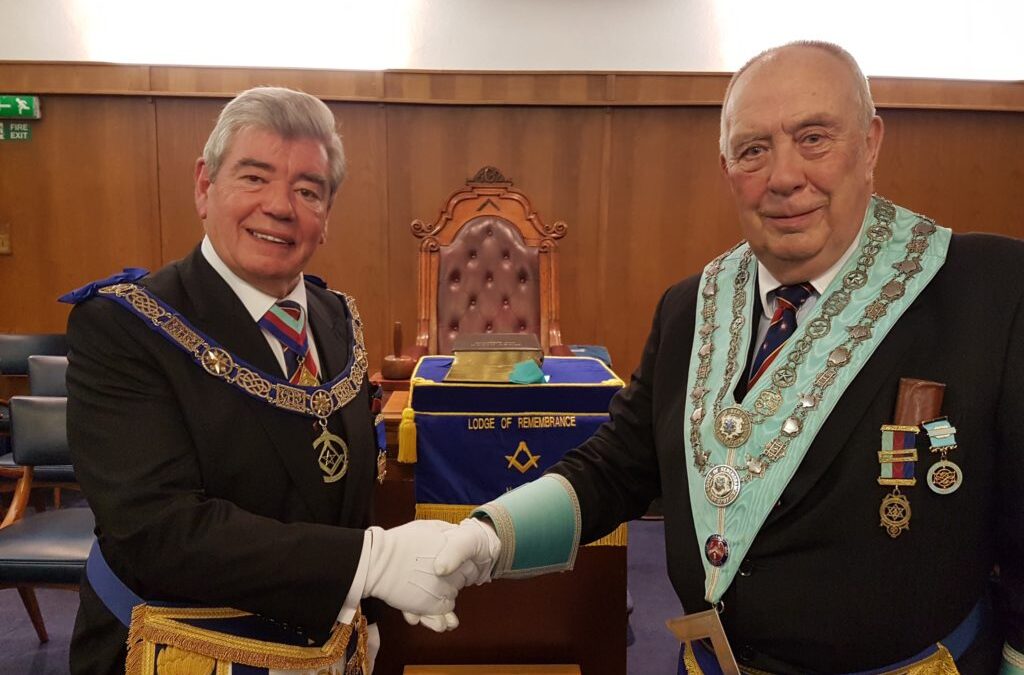 On the 29th March, over 80 Brethren met at Accrington Masonic Hall at the Adelaide Suite to celebrate 100 years since the consecration of the Lodge of Remembrance No. 3787.
Once the lodge had been opened by the Worshipful Master WBro Peter Hargreaves PAGDC and the business concluded, WBro Andrew Procter PProvJGW as ProvDepDC directed The Right Worshipful Provincial Grand Master RWBro Sir David Trippier RD, JP, DL accompanied by a large Provincial Delegation into the Lodge, whereupon he gladly accepted the gavel and occupied the Worshipful Masters Chair. After expressing his delight at being present at the meeting and introducing the Delegation, he asked WBro Hargreaves to give a short presentation on the Lodge history. WBro Hargreaves gave a very comprehensive account and began by explaining the naming of the lodge. it is not unreasonable to believe that as the lodge was consecrated during WW1 that the name would be in reference to remembering those lost at war. However it was actually named after the death of two Accrington Masons, WBro Rev JT Lawrence Vicar of St Peter’s Accrington and Bro BT Gosling a schoolmaster at Christ Church School. Both great masonic figures in the town. During the history of the Lodge it has Initiated 359 Brethren and welcomed 41 joining members, it has had 89 Masters and only 10 treasurers and 9 secretaries!
Following his Presentation Sir David checked the accuracy of the Centenary Warrant after which the Provincial Grand Secretary WBro Martin Roche PSGD PAPGM read the warrant to the Assembled Brethren. The Warrant was then placed upon the chequered carpet, after which the acting Provincial Grand Chaplain WBro Russell Conn presented an oration. He spoke about love, and how poignant it was that the Lodge had been formed during the Great War and how importance Remembrance is. He paid particular attention to the Accrington Pals and the horror of the Somme. His oration was very well received by the Brethren.
Sir David then formally presented the Centenary Warrant to WBro Hargreaves who graciously received it on behalf of the Lodge. The Brethren of Lodge of Remembrance No 3787 were then given permission to wear their specially commissioned jewel.
Sir David then addressed the Brethren and once agin expressed his delight at being able to officiate at this special ceremony. He also made reference to the fact that none present could have imagined what life was like in 1917 and in the chaos of the Great War, a new Lodge had been formed in Accrington and is still going strong to this day.
The RW PGM made a surprise promotion to conclude his address. He had chosen one Brother from the Lodge, and his choice was WBro Trevor Woodcock PProvGSwdB who he immediately promoted to PProvJGW. WBro Woodcock was perambulated around the Lodge to the delight of the Brethren. To say Trevor was surprised was an understatement.
Following his address WBro Hargreaves presented Sir David with a cheque for £500 for the ELMC. This was graciously received.
Following the retiral of the Right Worshipful Provincial Grand Master and his Delegation, the Lodge was concluded and the Brethren retired to the Festive Board.
The festive board was a delightful occasion with excellent fare and wonderful responses. In his response, Sir David paid particular tribute to Assistant Provincial Grand Masters WBro Farrington PSGD and WBro Martin Roche, who in effect had swapped positions in the Province. His positive comments on the work done by WBro Roche prompted him to sneak up and place a £20 note in Sir David’s hand to the hilarity of the Brethren. The RW PGM placed the note in his pocket to even greater applause…. We don’t know if the note made its way back to its original owner!
A wonderful evening celebrating the history of a very strong Lodge in the District. Everyone looks forward to the next phase of the lodge and it’s journey towards 200 years.