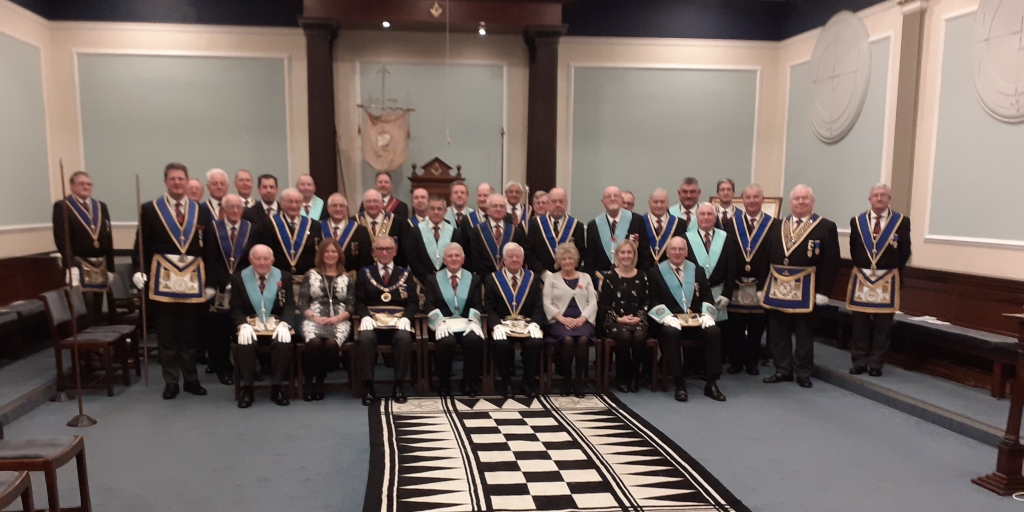 On 11th November, Maritime lodge met at Hemsley house to celebrate Alan Bancks 50 years in Freemasonry, where they opened the lodge and social board up to wives, partners and guests.

Alan started his masonic journey in Albert Victor lodge where he was proposed for membership of Albert Victor Lodge 1773 in 1969; Initiated on the 12th March 1970; Jumped from JW to WM 1977; Installed as WM by Harry Jackson in 1978; IPM in 1979. Alan was in the Master’s chair quite a lot during his IPM year.

The WM Harry, due to work commitments 5 days before he was due to install Bro Reg Humphreys, cried off after saying he would do it. The DC at the time was Ken Leatherbarrow. He rang Alan in a panic and, yes, like all DCs to ask if I would do the installation. Luckily Alan worked with three great Brethren, Harald Peel, Henry Cave and Frank Gee. They all agreed he should have Monday to Thursday off to read up on the ceremony, and it was with pay. It just proves what a man Alan is and what we all think of him. He got through his second installation, and I have been told it was a fantastic ceremony.

Alan was the 100th Master of the lodge. Yes, this was celebrated by the lodge, not Alan, on 11th January 1979. The Provincial Deputation was Lord Hewlett PGM and Towns DPGM. It was a night to remember with others, including Peter Walthall and Warwick Davenport.

Since joining Maritime, Alan has helped out with practice nights being the candidate.

Also, standing in for the Office of SW, JW, SD and JD, not forgetting IG all at the drop of a hat, I think he used to dodge me just in case I gave him a job on the night, but he was always willing and never said NO.