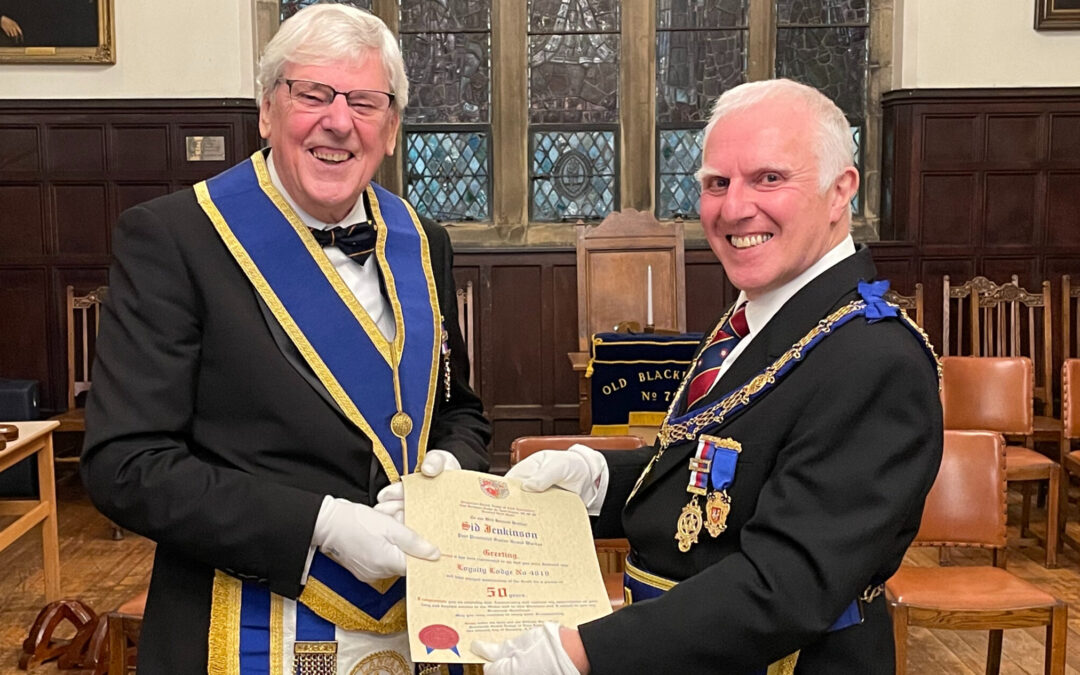 A meeting at Old Blackburnian Lodge No. 7933 is always a special occasion, but on Friday the 3rd December it was extra special with the celebration of 50 years in Freemasonry of Sid Jenkinson. Sid was well supported by a full Lodge Room and a District Delegation who all enjoyed a wonderful evening.

Following the business of the Lodge, John Lees the Provincial Deputy DC assisted by Ken Greer, led a District Delegation headed by the Assistant Provincial Grand Master, Alan Kirwillian into the Lodge and after taking the chair from the acting Worshipful Master Dave Mottershead, the celebration began.

Sid was initiated into Loyalty Lodge No. 4819 almost 51 years ago, and the minutes from that lodge are no longer available and thus couldn’t be read. The Lodge Secretary Trevor Procter then delivered his tribute to Sid, this included details of his masonic career, the work he did as part of the District Team and creating the first Provincial Website in 2005 along with his good friend Jim Sutcliffe.

As is the tradition for events such as this, the APGM highlighted events that took place in 1971. This included the old currency pre decimalisation on the 15th February 1971, just after Sid’s initiation in January, most of those present recollected this historic event. He continued to highlight the film and music stars of the era and who was prominent in the field of politics at the time.

Alan then presented Sid with his Illuminated Certificate from the recently retired Right Worshipful Provincial Grand Master Sir David Trippier, and a letter signed by the Deputy Provincial Grand Master in Charge John Farrington, following which Sid was perambulated around the Lodge to the rapturous applause of the Brethren. Before the delegation departed, District Secretary Brian Derbyshire presented Sid with an extra token of appreciation and his 50th lapel badge which he hoped he would wear with pride. Brian thanked him for all the hard work he has put into the District and Freemasonry in general.

The festive board was wonderful with everyone enjoying each other’s company and partaking in the usual excellent ‘Old Blacks’ meal.

Before the toasts and a slight distraction from the proceedings (with the approval of Sid) David Lightbown, the WM of Verity Lodge No. 3949 along with the required quorum of members of that Lodge, claimed the Travelling Gavel. This had been in the possession of Old Blackburnian Lodge for a few years and had been proudly on display in front of the acting WM David Mottershead who graciously handed it over.

In his response Alan Kirwillian was brief but very sincere in congratulating Sid on his achievement and the members of the Lodge for putting on an excellent evening.

Jim Sutcliffe proposed the toast to Sid and recounted some amusing tales about their family holidays together and the work they did in setting up the first Provincial Website. Sid gave an

emotional response along with his thanks to all those who had contributed to the evening which he had thoroughly enjoyed. Everybody stood and gave a hearty round of applause.

The Brethren left happy and well fed and watered. The evening was a fitting tribute to Sid, a dedicated Freemason who has done a great deal in the District as a former District Secretary and to promote communications as one of the first District Communications Officers.