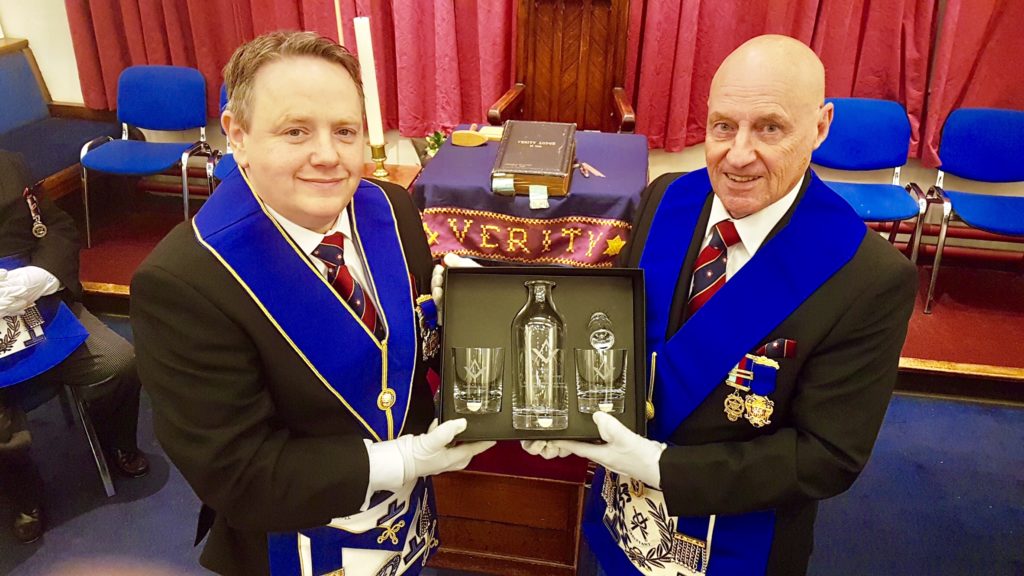 On Saturday the 25th of November at Verity Lodge No.3949, WBro David Lightbown PAGDC was presented with a Decanter and glasses to mark his 12 years of District service by his Successor as Chairman WBro David McGurty PProvGSwdB, having recently come to the end of his term as the East Ribble District Chairman. The presentation was on behalf of all in the District, with many visitors having come along on the morning to witness David receive this small token of appreciation.
WBro Lightbown’s District service began in 2005, working with Lodges and Chapters in Blackburn and Darwen as the District Charity Steward, progressing onto Deputy Chairman in 2009, continuing into the amalgamated East Ribble District in the same role in 2011 before succeeding WBro Paul Aspinall PAGDC as Chairman in May 2012. Five and a half years later his successful tenure in the position came to a close at Provincial Grand Lodge, where the Right Worshipful Provincial Grand Master Sir David Trippier RD, JP, DL publicly thanked him for his work and dedication.
The Deputy Provincial Grand Master VWBro Derek N Thornhill then further surprised WBro Lightbown by presenting him with some flowers for Mrs Susan Lightbown, a small token of the Districts’ sincere thanks for her support for David during his service to the District. He commented that behind every good man was an even better woman, and he could have asked for no better support than what he has received from Susan.
Feeling a touch emotional, thanked all for their kindness today, and their support over the last twelve years. However, not one to rest on his laurels, his work continues as Chairman of the ELMC Committee of Benevolence and upcoming appointment as the Chairman of the Hewlett Court Advisory Committee.
Picture tag: Top L to R: VWBro Derek Thornhill PGSwdB DPGM, presents flowers to WBro David Lightbown PAGDC for Mrs Susan Lightbown. WBro Dave McGurty presents the Decanter.
Bottom L to R All together with the WM of Verity Lodge No.3949, WBro Brian Derbyshire PProvDepGDC, Decanter & glasses.