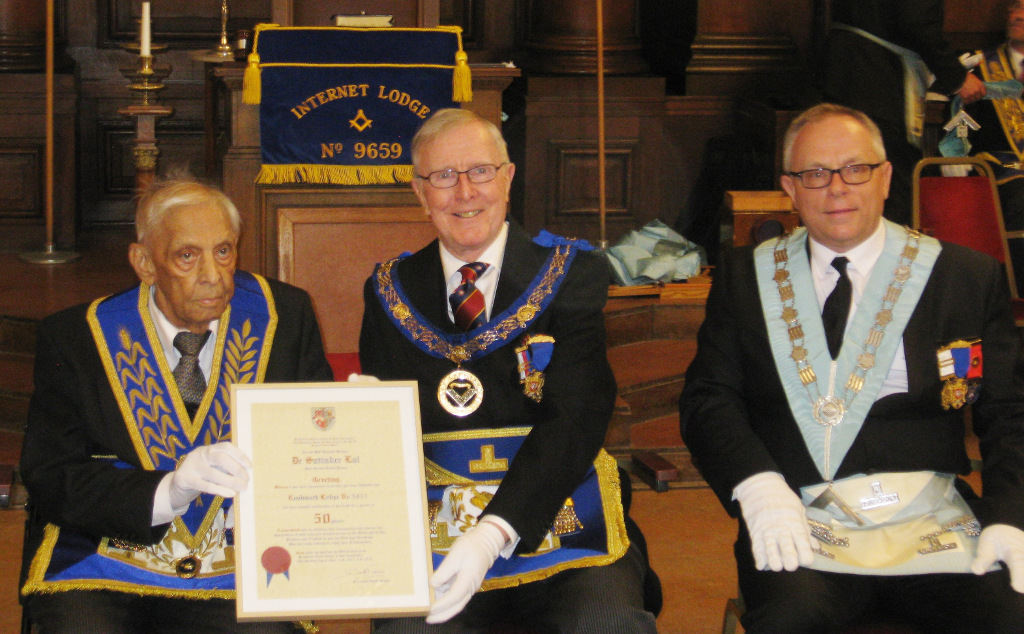 Internet Lodge No. 9659
Installation Meeting and Celebration of Fifty Years in Freemasonry
for WBro Satinder Lal PSGD
Brethren from across Europe, America and the UK attended the Installation meeting of Internet Lodge on Saturday 18 March at Manchester Hall Bridge Street.   The Lodge meeting was held in the Goulburn Lodge room followed by the Social Board in the newly refurbished dining room. It was also a special day for WBro Satinder Lal PSGD who celebrated Fifty years in Freemasonry.
The Lodge welcomed the Assistant Provincial Grand Master for Manchester,
WBro Chris Welton PSGD, accompanied by the Chairman for City Derby District
WBro David Hudson ProvSGW, WBro Chris Prax PProvJGW, Chairman for City Sykes District and WBro Darren Kennedy ProvAGDC.
In his address, the Assistant Provincial Grand Master informed the Brethren that Satinder was born in the same year as Queen Elizabeth II and Initiated into Landmark Lodge No. 5411 on 20th April 1966. Provincial Honours in the Craft came along followed by Grand Honours when in 1986 he was made PAGDC promotion then followed in 1993 to PJGD and finally to the very high rank of PSGD in 2003.
Worshipful Brother Lal has also been honoured in the Royal Arch, receiving his first appointment in 1991 to the rank of, PGStdB, promotion followed in 2004 to the rank of PAGSoj. Such high Honours are a tribute to Satinder for all his hard work, not least for the Masonic Samaritan Fund where his efforts were legendary.
After being presented with his illuminated Certificate by WBro Welton and a congratulatory letter from the Provincial Grand Master Sir David Trippier, the Lodge Director of Ceremonies WBro Stephen Gregory PAGDC then perambulated Satinder round the Lodge room to spontaneous applause from over One Hundred Brethren present.
After the celebrations for WBro Satinder Lal the Worshipful Master of the Lodge,
WBro Alan Turton Installed his successor Bro Carl Nigel Freeland who resides in Macedonia.
The Lodge closed everyone retired to a very enjoyable Festive Board which ended a splendid way to celebrate 50 years in Freemasonry and an Installation meeting.