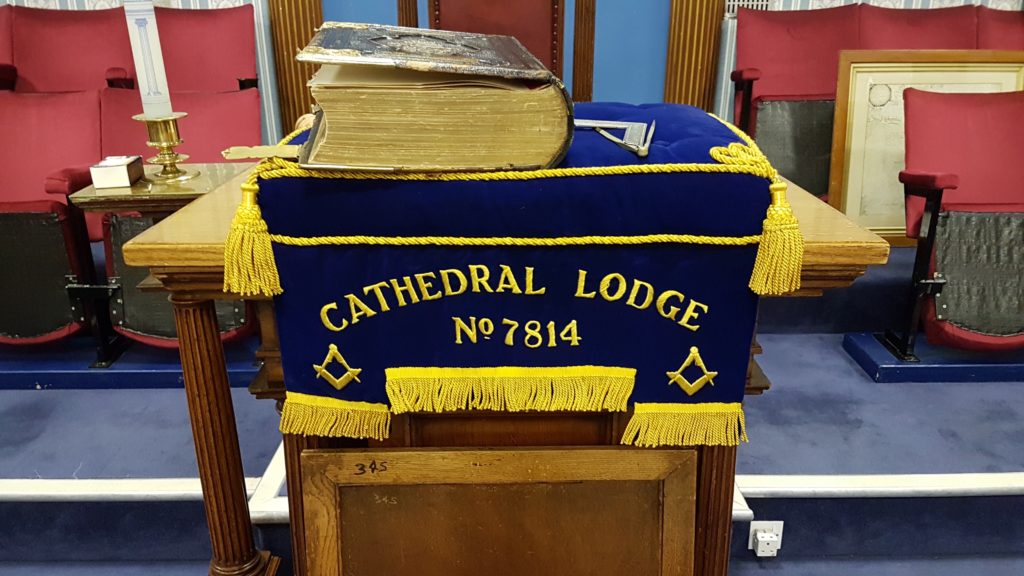 The closure of a Lodge is never a happy occasion, but the final meeting of Cathedral Lodge No. 7814 on 16th April in Blackburn Masonic Rooms was a very dignified event with a great sense of occasion and a real feeling of pride on the 56 year life of the Lodge.
The Lodge was opened by the Worshipful Master WBro Mike Stubbs PProvSGD and the Officers of the Lodge. He then formally welcomed the Deputy Provincial Grand Master VWBro Derek Nelson Thornhill PGSwdB, who responded on behalf of himself and WBro John Farrington PSGD APGM. The business of the Lodge was begun, the highlights being the final donation to charities including £1500 to the ELMC Widows Fund to help support the widows of the Lodge, £600 to Macmillan Cancer Support, £200 To Blackburn Masonic Hall. The remainder of the Lodge funds to be disbursed in favour of the ELMC.
WBro Brian Metcalfe PProvGSwdB then gave a brief history of the Lodge and he highlighted the mainly unpredictable circumstances leading to the Lodge closure. WBro Metcalfe reported with great pride, the excellent charitable giving, the highlight being the £29,130 raised during the last Festival which made them the biggest donors in the District and fifth in the Province, a great achievement.
Following the history, WBro David William George Bell PProvDepGReg, Lodge Secretary and son of Lodge Founder WBro William George Bell PProvDepGDC read a poem entitled ‘Closing of this Lodge’. His delivery was sincere and emotional.
WBro Farrington then addressed the assembly and thanked the Brethren of Cathedral Lodge for the work they had done over it’s life, he went on to say how sad it was to see the Lodge close, and he wished the Brethren well in their future Masonic careers.
The worshipful Master called upon the Brethren of Perseverance Lodge No. 345 who had supported the Lodge over the years, to the Pedestal, where he presented them with a small gift in recognition of their hard work. The Lodge was then closed for the final time, after which the Brethren of Cathedral Lodge No. 7814 assembled in the centre of the Lodge whilst the warrant was passed amongst them, before it’s presentation to WBro Farrington and its subsequent onward journey to Grand Lodge.
The festive board was one of memories of a great Lodge, pride in it’s achievements but importantly a positive look to the future as the Brethren move on to other Lodges.