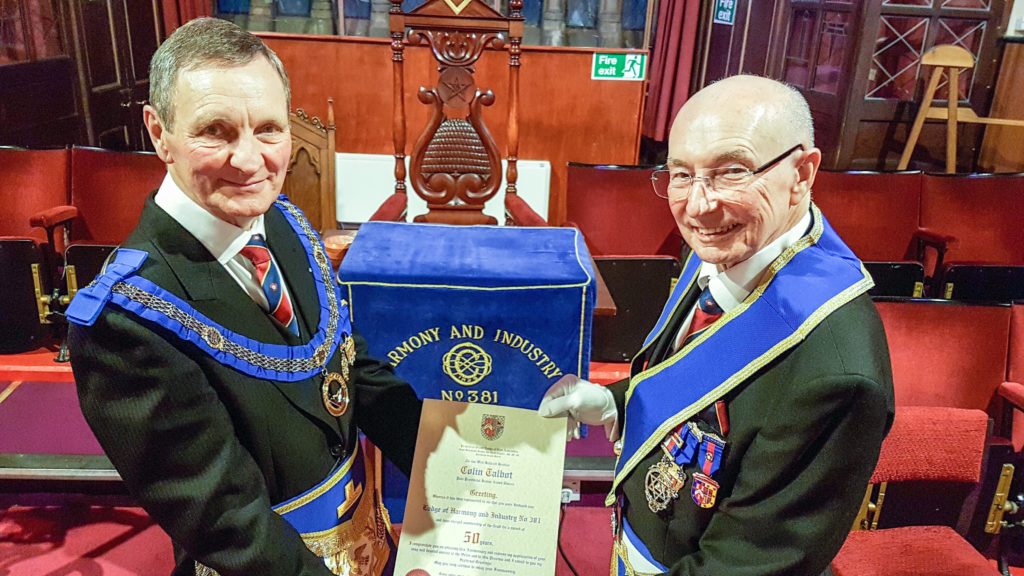 The meeting of Harmony and Industry Lodge No. 381 on Thursday 12th April 2018 was a very special occasion, where the Lodge celebrated 50 years in Freemasonry of WBro Colin Talbot PProvJGD.
After the Lodge was opened and the business concluded, WBro Simon Archer PAGStB ProvGDC led into the Lodge, a District Delegation headed by WBro John Farrington PSGD APGM and comprising of twenty Grand, District and Acting Officers of the Year.
WBro Farrington was happy to accept the gavel and occupied the chair. After his welcome and introductions, he instructed WBro Archer to place WBro Talbot into the centre of the Lodge. The summons of April 1968 meeting was read followed by a tribute to Colin by WBro Hull. WBro Hull referred to Colin’s career, his National Service and career in business after his demobilization in 1965. He continued to say that Colin was the last Mayor of Darwen Borough Council in 1974/75. WBro Hull went on to explain that Colin was a keen sportsman, having played cricket to a high level.
WBro Farrington then proceeded to highlight some of the world events happening during the year of Colin’s Initiation, these included the death of Martin Luther King, Apollo 8 becoming the first manned spacecraft to orbit the moon, The Boeing 747 ‘Jumbo Jet’ making its maiden flight, Harold Wilson was Prime Minister and Sir Edward Heath was in opposition and Manchester United became the first English club to win the European Cup beating Benfica 4-1 after extra time at Wembley.
WBro Farrington then presented WBro Talbot with his Illuminated Certificate and personal letter from RWBro Sir David Trippier the Provincial Grand Master, both of which WBro Farrington read to the Brethren.  WBro Talbot was then perambulated around the Lodge to the rapturous acclaim of the Brethren assembled. To complete his ceremony, WBro Dave McGurty PProvGSwdB the District Chairman presented Colin with his 50th Anniversary lapel badge and exclaimed that this was becoming a very common practice within the Brethren of Harmony and Industry Lodge No.381
Before WBro Farrington and the Delegation retired from the Lodge, the Worshipful Master WBro Norman Jepson presented him with a cheque to the value of £500 to the ELMC. This was very gratefully received.
The festive board was a joyous occasion. WBro Farrington referred to the Tercentenary and the important and permanent legacy of the Memorial Garden and the VC memorial which will be lasting reminders of this important landmark. He also expressed delight at recruitment within the District being on the rise.
The toast to WBro Talbot by the Worshipful Master elaborated on his life story, he was presented with a gift from the Lodge members. In his response he thanked the Brethren for their company and expressed delight at his Masonic life so far, he also encouraged the junior Brethren to enjoy their Freemasonry. A raffle on the night raised a total of £276. A wonderful evening and we look forward to many more happy years in Freemasonry for WBro Colin Talbot PProvJGD.