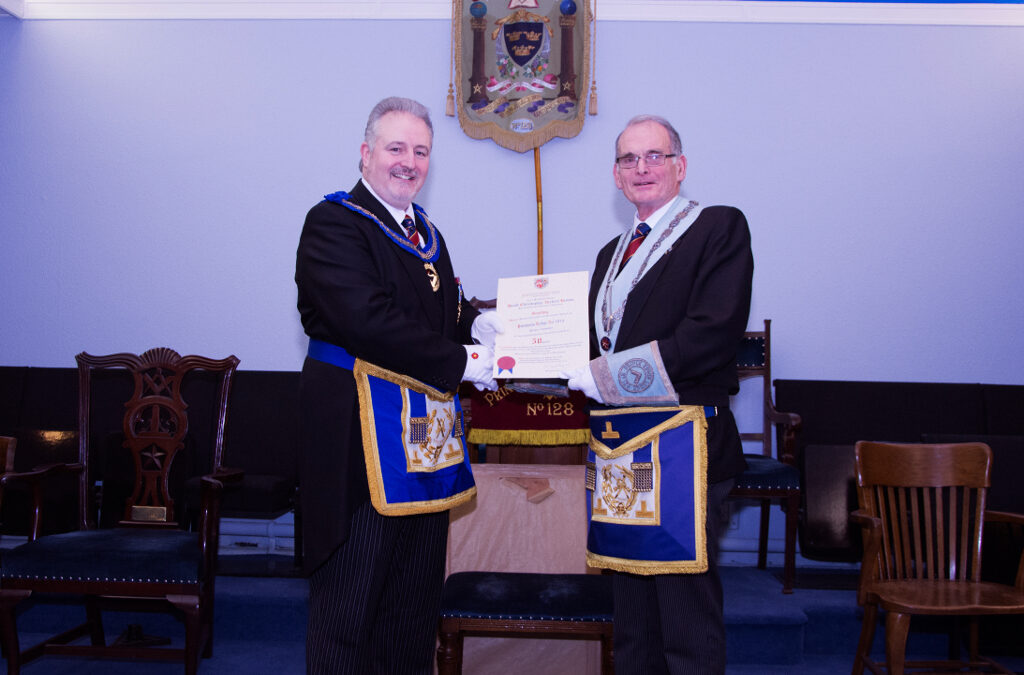 Friday 16th January 2016 saw Prince Edwin Lodge No. 128 celebrate the Golden Jubilee of their Worshipful Master, David Christopher Herbert Brown, at Bury Masonic Hall.
David is one of the mainstays of Masonry. His masonic history is far too long and illustrious for me to right down and give any justice to his achievements but to say that his current Grand Rank of Past Assistant Grand Director of Ceremonies is a credit to him, his lodge and the Province of East Lancashire is an understatement.
Presiding over the presentation was our Assistant Provincial Grand Master, John Griffin, who was accompanied by a plethora of Grand, Provincial and District officers. The lodge room was at full capacity and the atmosphere was splendid.
David Winstanley delivered a most heartfelt tribute to David displaying the Brotherly solidarity that actuates our great fraternity. John Griffin presented the certificate and personal letter from the Provincial Grand Master,

Sir David Trippier.
It should be noted that this evenings meeting was the last evening meeting for Prince Edwin, indeed their last meeting at Bury Masonic Hall as the lodge moves to a day time lodge meeting at Radcliffe Masonic Hall. As such it was David’s wish to remain in the lodge to close it. John Griffin chose to remain with the celebrant and so all witnessed the last closing of Prince Edwin Lodge No 128 at Bury Masonic Hall. We wish them every success in their new home.
Once closed one and all retired to the Social Board where a most amazing atmosphere was experienced. Great company, camaraderie and speeches. The toast to David was given by Rodney North, who is a member of David’s mother Lodge, Peninsula Lodge No. 5914 in Cheshire.
By the evenings end a most excellent time had been experienced by all.
May I take this opportunity to thank 128 for all the work they had put into the evening and for being exceptional hosts.