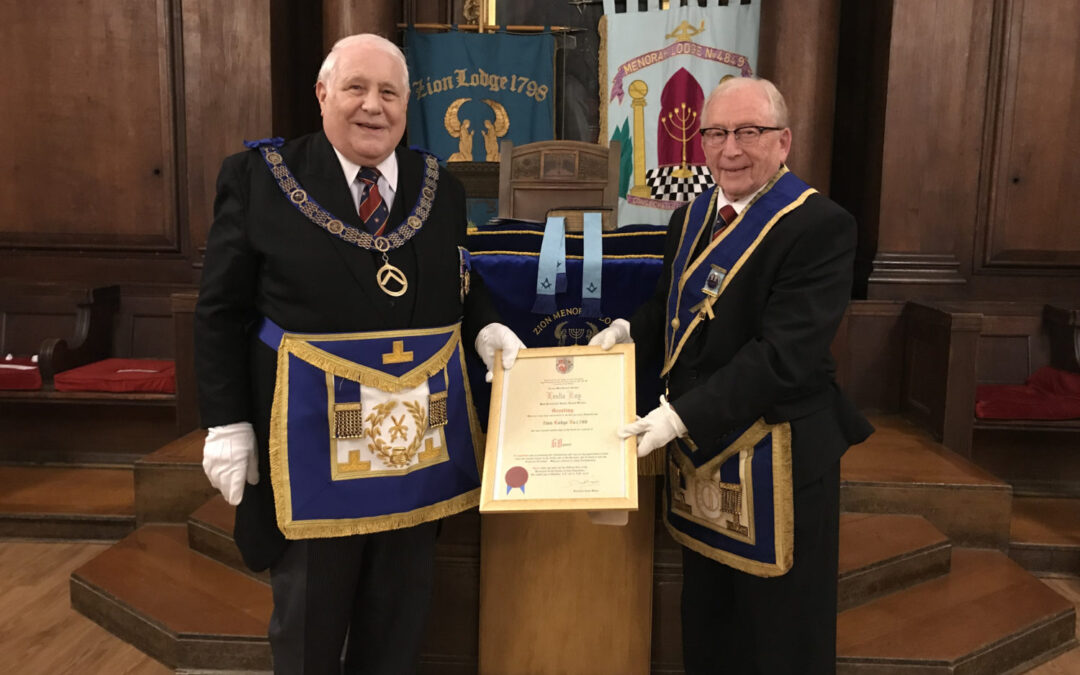 The meeting of Zion Menorah Lodge No 1798 on Thursday 9 May 2018 was a very special occasion for WBro Leslie Kay, as he celebrated the 60th Anniversary of his initiation into Freemasonry.
The Goulburn Lodge Room was packed out with Brethren wishing to help celebrate this momentous occasion. The lodge was opened by WBro Mathew Phillips, Worshipful Master of Zion Menorah Lodge, and once some of the business of the lodge was completed, there was a Report.
The Deputy Provincial Grand Director of Ceremonies, WBro Phillip Collier, entered the lodge room and announced that VWBro Derek Thornhill, Deputy Provincial Grand Master for the Province of East Lancashire, accompanied by a Provincial Delegation, was without and demanded admission.
Having entered the Lodge, Bro Mathew Phillips offered the gavel to WBro Thornhill, which he graciously accepted. He began by introducing his Provincial Delegation, which included WBro Chris Welton, Assistant Provincial Grand Master for the Manchester Districts; WBro Paul Rose, a Past Assistant Provincial Grand Master for Manchester and currently Deputy Grand Superintendent in the Royal Arch; WBro Chris Prax, City Sykes District Chairman; WBro Joe Glass, Provincial Senior Grand Warden; WBro Mo Afsa, Provincial Junior Grand Warden; and many Grand Lodge Officers.
With the introductions completed, VWBro Thornhill asked the Deputy Provincial Grand Director of Ceremonies to place WBro Kay in the centre of the lodge. VWBro Thornhill described WBro Kay’s commitment to Freemasonry as a wonderful achievement and said it was an honour and a pleasure to preside over the evening’s events.
The Lodge Secretary, WBro Michael Bartle, read extracts from the minutes of the meeting of Zion Lodge, which was held on 8 January 1958 and on that evening, a Mr Leslie Kay was initiated into Freemasonry by his father, WBro Danny Kay.
WBro Kay went on to become Worshipful Master of Zion Menorah Lodge in 1974, and then Column Lodge in 2008. He was appointed a Past Provincial Senior Grand Deacon in 1984, promoted to Past Provincial Grand Sword Bearer in 1994, and further promoted to Past Provincial Junior Grand Warden in 2006.
The Deputy Provincial Grand Master then began to reminisce on the year of 1958 and tested the assembled brethren’s memory, seeing how well they could remember it. In football, Wolves won the League and Bolton won the Cup, but Manchester was grieving following the tragic events of the Munich Air Disaster. Harold McMillan was the Prime Minister, it was the year Gary Oldman and Michelle Pfeiffer were born and Hula Hoops and Corgi Toys were popular with the children.
The mood was particularly joyful in the lodge room and as the Deputy Provincial Grand Master began to list the memorable songs of the year, the brethren began singing many of them including the Everly Brothers – All I have to do is Dream.
The Deputy Provincial Grand Director of Ceremonies conducted WBro Kay around the Lodge, to the rapturous applause and acclamation of the brethren. Having been seated, WBro Chris Prax presented WBro Kay with his 60 year Lapel Pin Badge.

Three Junior Brethren from Zion Menorah Lodge were then honoured to receive their Grand Lodge Certificates from the Deputy Provincial Grand Master and once the Alms collection had been taken, VWBro Thornhill expressed his desire to retire from the lodge and to be accompanied by both his delegation and the evening’s celebrant, WBro Kay.
Bro Phillips re-occupied the Chair of King Solomon and closed the lodge.
The Festive Board was both a vibrant and extremely friendly affair. WBro Martin Caller had the honour of proposing the toast to WBro Kay; reminding everyone of the endless hard work WBro Kay had done, not only for Zion Menorah Lodge, but for the larger Jewish Community in Manchester and beyond. This tribute was then followed by a few well-chosen and meaningful words from his son-in-law, Bro David Phillips.