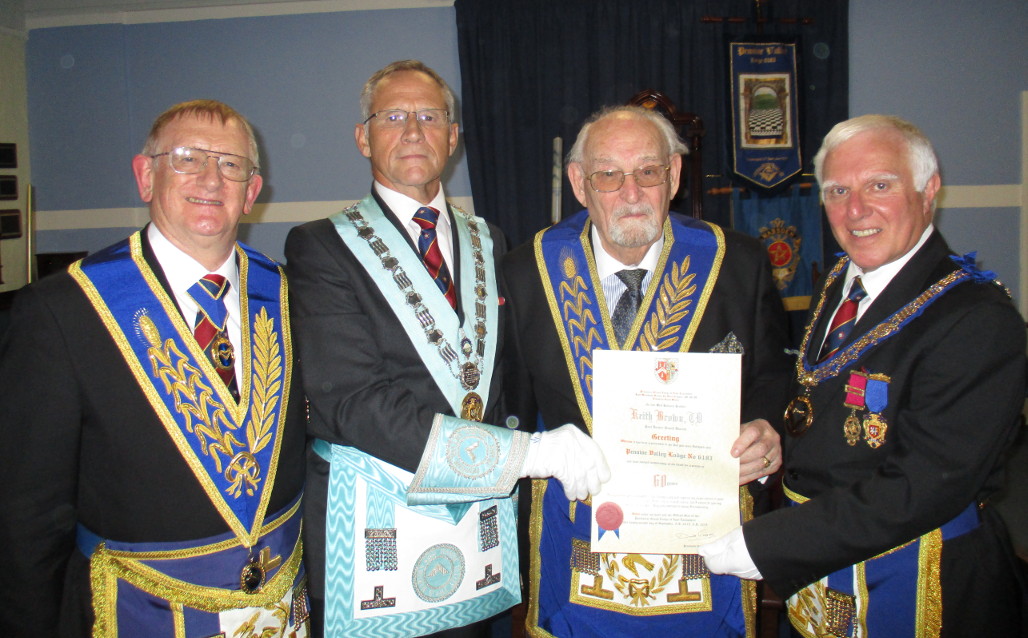 Over 50 Brethren signed the Tylers attendance register of Marden within Pennine Valley Lodge, No. 6183, on Tuesday 24th September 2019 to celebrate the 60th anniversary in Freemasonry of WBro Keith Brown, TD, PJGD.
The Worshipful Master of Marden within Pennine Valley Lodge, 6183, Bro Kevin Pickering., opened the Lodge and after concluding the preliminary business, received a report. The Provincial Deputy Grand Director of Ceremonies, WBro John Curry, was admitted and announced that WBro Alan H Kirwilliam, PSGD, the Assistant Provincial Grand Master for the Northern Area of the Province of East Lancashire, accompanied by WBro James Sutcliffe PSGD,  a Past Assistant Provincial Grand Master for the Northern Area and WBro Robert F Allan, PProvGSwdB, District Chairman for Burnley and Pendle District and a Provincial and District Delegation was without and that he demanded admission.
ving taken his seat, WBro Kirwilliam and the Grand Officers present were saluted in due form.
The Worshipful Master then greeted WBro Kirwilliam and offered WBro Kirwilliam the Gavel,  WBro Kirwilliam thanked the Worshipful Master and accepted the Gavel.
WBro Kirwilliam then introduced the members of the Provincial and District Delegations and then instructed Provincial Deputy Grand Director of Ceremonies, to place WBro Brown in the centre of the Lodge.
The Lodge Secretary, WBro Richard Sagar, PProvJGD, was then invited to read the minutes of the meeting at which WBro Brown was initiated, following which WBro Kirwilliam then referred to some of the significant events and other interesting facts relating to the years between WBro Brown’s 50th and 60th anniversaries, along with WBro Brown’s most impressive Masonic “curriculum Vitae”.

WBro Brown with honoured guests and the Provincial and District Delegation

WBro Kirwilliam, with the celebrant’s permission, then read the personal letter and illuminated certificate from the Right Worshipful Provincial Grand Master and presented them to WBro Brown, who was then presented to the Lodge by the Provincial Deputy Grand Director of Ceremonies to the acclaim of the Brethren present. To conclude the formal proceedings a 60 years lapel badge, to be worn with pride, was presented by the District Chairman, WBro Robert Allan.
Following the Alms collection, WBro Kirwilliam thanked all that had been involved in the evening’s celebration.

A very well attended festive board
The Social Board was a happy and convivial occasion, enjoyed by all in attendance. Toasts were well received and appropriately acknowledged, particularly those to the Celebrant, WBro Keith Brown. A most suitable celebration of a remarkable Freemason.
Article: –  John Wilkinson
Pictures: – John Curry