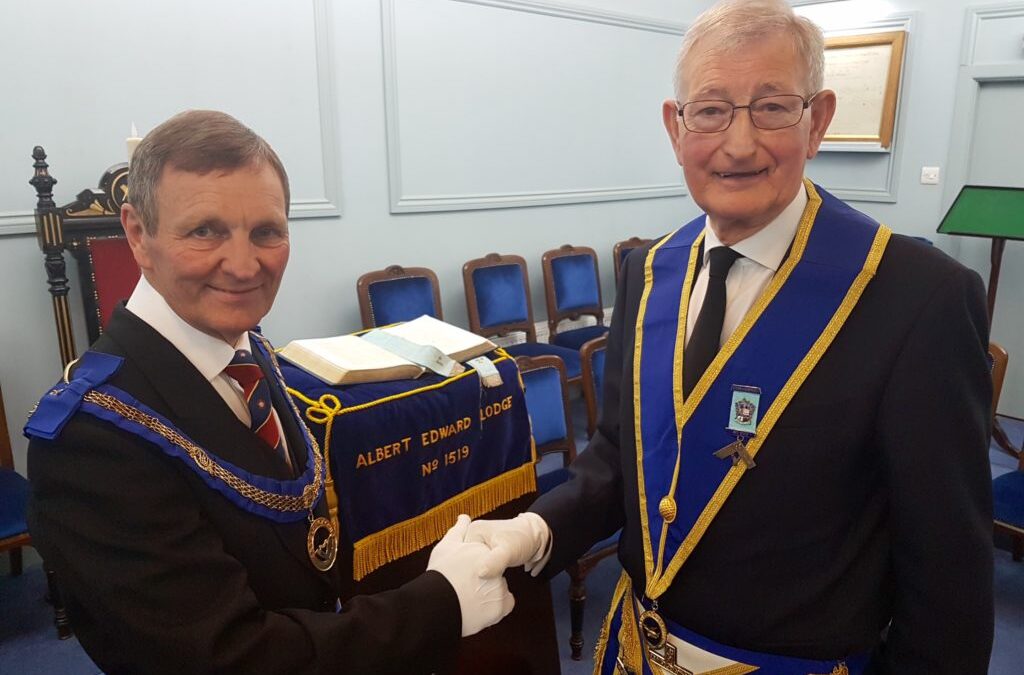 On the 27th April, Albert Edward Lodge No 1519 held a very special meeting to celebrate the 50th anniversary in Freemasonry of their WBro Christopher William Maden PProvJGD. The lodge was opened and the business transacted before the Provincial Deputy Grand Director of Ceremonies WBro Andrew Taylor as ProvDepDC led a District Deputation headed by the Assistant Provincial Grand Master WBro Richard John Farrington PSGD and consisting of District Officers and numerous Grand Officers. WBro Farrington was delighted to accept the gavel and took the Master’s Chair. After introducing the Deputation, WBro Farrington asked that WBro Maden be placed in the Centre of the Lodge and directed WBro John Shaw to present his tribute. In his delivery he made reference to the fact that WBro Maden had been initiated into Freemasonry (Lodge of Commerce 215) by his father who also formally presented and fully explained the working tools of an EA at the meeting. He was also passed by his Father 6 months later. He went on to explain that WBro Maden was instrumental in ensuring that the Lodge of Commerce 215 continued by its transfer to Berkshire upon the closing of Haslingden Masonic Hall. It still thrives to this day and Chris and John visited the Lodge during the previous week where they presented WBro Maden what’re a presentation was also made there. Outside of Freemasonry WBro Maden is a volunteer at Bolton Hospice and is a patron of the local operatic society.
The most amazing thing about WBro Shaw’s tribute was the fact that his father also completed 50 years in Freemasonry and between them they currently have a combined 102 years as Freemmasons. This fact made the evening even more poignant for WBro Maden. Chris was then presented with a personal gift from the Lodge members which he received with thanks.
As is traditional at such events WBro Farrington highlighted some of the events happening around the world 50 years ago in 1967, these included the fact that Harold Wilson the PM was to announce the country would be applying to join the EEC, the average price of a house was £3840, the Stockport air disaster happened with the loss of 72 lives, the first North Sea gas was pumped ashore, the Torrey Canyon disaster happened and the first heart transplant took place.
WBro Farrington then proceeded to present WBro Maden with his Illuminated Certificate and personal letter of congratulations from the Right Worshipful Provincial Grand Master RWBro Sir David Trippier. These were both read to WBro Maden, upon which he was perambulated around the Lodge to the acclimation of all present. District Chairman WBro David Lightbown PAGDC then presented Chris with his 50th anniversary lapel badge which he hoped he would wear with pride at all subsequent Masonic events.
Following a collection, the Deputation retired from the Lodge and the business concluded before the Brethren retired to the festive board.
The festive board was a joyous occasion with the highlight being the toast to the celebrant given by WBro Shaw. He recounted how they had been friends for many years and how their paths had crossed many times through their professional careers in the textiles industry. The tale of how he got the nickname ‘The Phantom’ whilst working for P & S Filtration was particularly well received by the Brethren. WBro Shaw continued to explain how WBro Maden still works as a consultant today. We learnt that WBro Maden is a keen fly fisherman and has taken up Bridge and is kept very busy with his 6 Grandchildren in Sheffield and Garstang. WBro Maden thanked all the Brethren for their attendance and WBro Shaw for his toast. He stated how special the evening was in light of his Father meeting the same milestone. We look forward to attending his 60th anniversary in 2027.