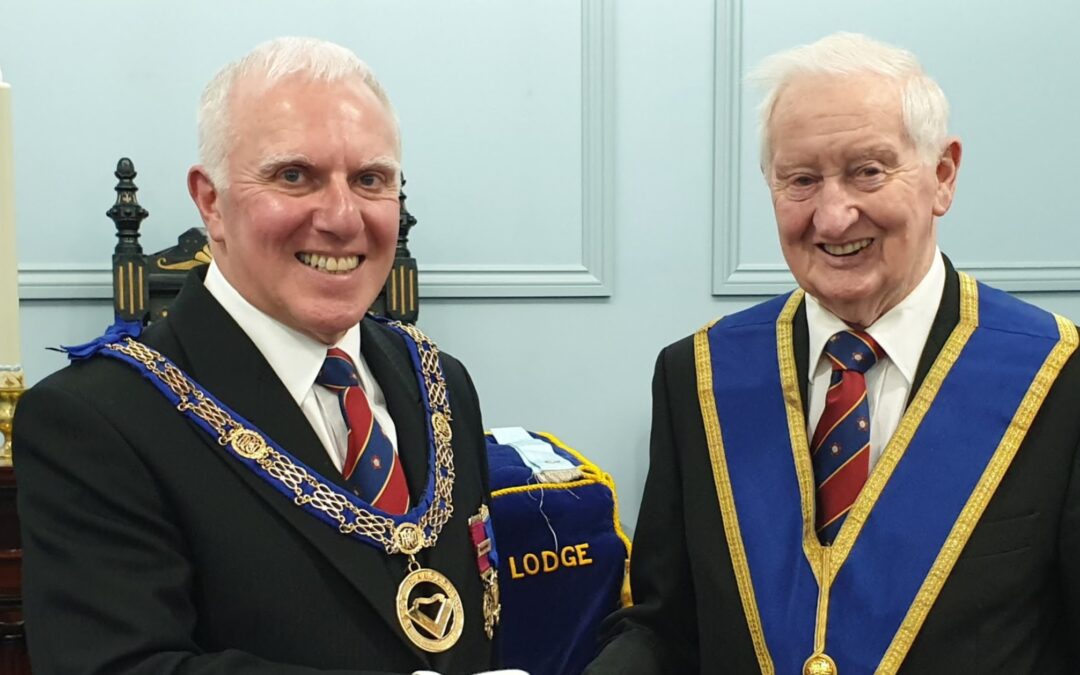 On Thursday 27th February at the meeting of Albert Edward Lodge No. 1519, 50 Brethren gathered at Mill House Masonic Hall in Clayton-le-Moors, to celebrate the Golden Anniversary in Freemasonry of WBro Brian Cowburn.

Following the opening business, WBro John Lees the Provincial Deputy Director of Ceremonies guided a large delegation of Grand Officers and the District Team led by our Assistant Provincial Grand Master WBro Alan Kirwilliam into the Lodge where he borrowed the Worshipful Masters Chair from Master Bro Terry Woods.

The Lodge Secretary WBro Stephen Dowber read the summons from the meeting of the 26th February 1970 which was held across the road at the Conservative Club and with 60 Brethren present. WBro John Shaw then delivered his tribute to Brian which included details of his masonic and work life as well as his great work as a retained fireman and some of his intrepid exploits atop tall ladders!

WBro Kirwilliam then proceeded to recall some of the events that happened in 1970, these included the music of the day, the films showing and some of the technological achievements including the near Apollo 13 disaster. It is always interesting to hear the change in prices of everyday goods and services from 50 years ago all in ‘old money’. Following the presentation of his illuminated certificate and personal letter from the Provincial Grand Master Sir David Trippier, Brian was perambulated around the Lodge to the acclaim of the Brethren. To complete his evening out District Chairman WBro Dave McGurty presented Brian with his 50th lapel badge which he hoped he would wear with pride.

During the ceremony Brian made the amazing announcement that he was wearing the same shoes that he wore on his Initiation and his Installation, he called them his ‘Tommy Ball’s Specials’ It was also announced that he had refused a gift from the Lodge to mark the occasion and that he wanted a donation to the ‘Willow Foundation’ a charity dear to him, and who give experience days to cancer patients from the age of 16 to 40.

The festive board was a joyous occasion, with excellent food and fraternity. The toast to Brian was given by WBro David Anderson and in his response, Brian referred to the many Freemasons he had met around the world and how he has enjoyed the experience of being a very active Freemason. He also referred to the purchase of Mill House Masonic Hall and the early work that the Lodge put in to convert the old building to a working Masonic Rooms which have their own 50th Birthday next year. His recollection of the free beer table at the festive boards of the time, prompted the Brethren to request this be reinstated!

This was a wonderful celebration of the Masonic life of a very dedicated and popular Freemason. We look forward to his 60th Celebration and to see the shoes make another appearance.