Tercentenary Celebrations in Mumbai January 2017 – Freemasonry in the East 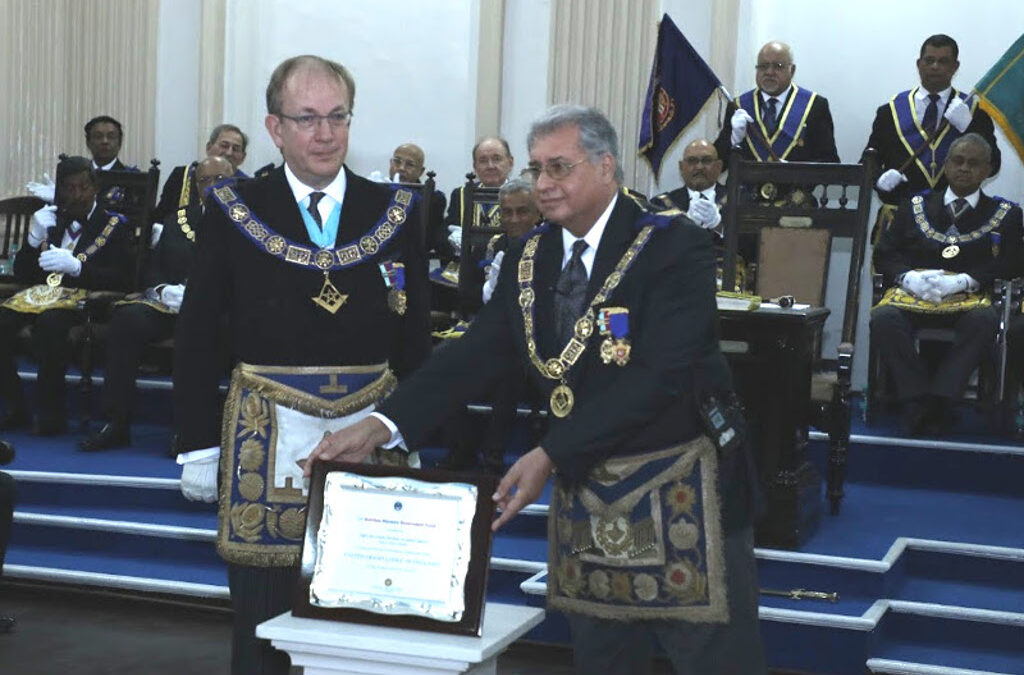 All honoured guests, were welcomed by Bombay District Grand Master RW Bro Percy J Driver.
The District Grand Lodge of Bombay was privileged to have been chosen as the venue for the Tercentenary Festivities on behalf of all Districts in the East.
The celebrations also marked another historic occasion. Brethren from all four Indian Districts, as well as several overseas Districts, came together for the very first time, for a Craft event, in very large numbers. This indeed was a rare chance for masons from across Asia and beyond to connect with each other.
On the first day was the Fifth Asia-Oceanic Conference, which was held at Freemasons Hall, where the RW Deputy Grand Master Jonathan Spence began the speeches as an honoured guest, then VWBro Chris Caine gave a speech on the charities and our own WBro Michael Holland of Alexandra Lodge 993, Audenshaw District, gave a speech on ‘The Member’s Pilot Project Pathway’.

WBros. Ray Charlton, Paul Waring and Ivan Eastwood at the Social Board

Later that evening an Extraordinary Meeting of the District Grand Lodge of Bombay was held and our RW Deputy Grand Master Jonathan Spence and the District Grand Master of the District Grand Lodge of Bombay Percy J Driver launched the Bombay Masonic Benevolent Fund. This fund has been set up to offer relief from financial distress and poverty, to provide medical assistance, to support education, and to sustain other similar deserving charitable causes.
Also in attendance were the Grand Director of Ceremonies Oliver Lodge, WBro Ivan Eastwood, WBro Paul Waring Audenshaw Deputy Chairman and WBro Ray Charlton Audenshaw District Mentor.

WBros Paul Waring, Michael Holland and Ray Charlton helped to launch the Tercentenary Celebration year in fine style. It was a most enjoyable event which they all thoroughly enjoyed and will remember as a most memorable occasion.