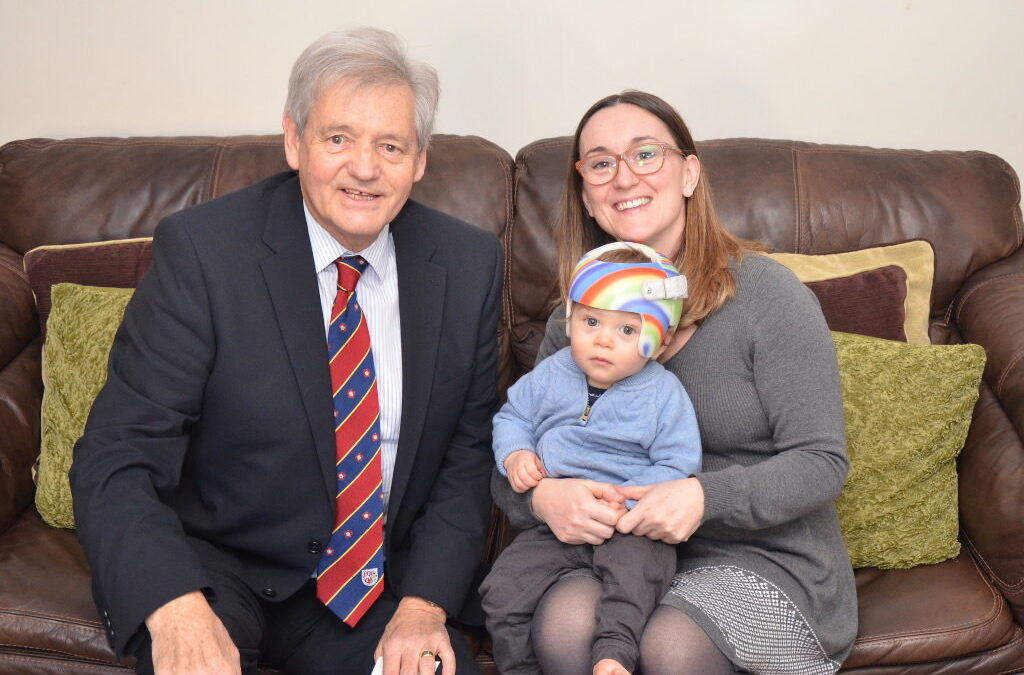 Reggie shows off his helmet with Mike Gibbons and his mother, Emma

In September 2016 the members of the Lodge of Merit No 934, meeting at Bury Masonic Hall, were made aware of fundraising initiatives being undertaken by a local family to support essential medical treatment for their young son, and decided to help.

Soon after Reggie Knowles and his twin brother Vincent were born, mum Emma realised that Reggie’s skull was developing differently from Vincent’s. Reggie was diagnosed with a condition known as plagiocephaly, a form of ‘flat head syndrome’ where the baby has an asymmetry of the head shape. Reggie’s head was slightly wide, with one ear pushed forward in relation to the other and with the brow more prominent on one side.

Whilst this was understandably scary at first, Emma’s researches showed that the condition could be significantly corrected if caught early and addressed. The problem for the family was that funding for the special helmets Reggie would need to assist his skull in developing normally was not available through the NHS, as the treatment is classed as cosmetic.

With support from family and friends, the £2,000 cost of Reggie’s first special custom made helmet was raised and a purchase made from specialist supplier Technology in Motion. Reggie had to wear the helmet for as much as 23 hours every day. However, as he grew, the helmet became too small and needed to be replaced at a further cost of £2,000. To raise funds the family organised events such as crowd funding and a race night, and their efforts and hard work were rewarded when they hit their target and were able to purchase a second helmet for Reggie so that his corrective treatment could continue.

Although the members of Lodge of Merit had been able to help in a small way with sponsorship of the race night, they were aware that, as Reggie continued to grow, he would need a third helmet at a cost of another £2,000. Lodge members agreed to support that cost with a donation of £500 and, an application was made to the ELMC Grant Making Committee for an additional £1,500 to ensure that the Knowles family would have the full funding available when a third helmet is needed for Reggie.

Reggie with Mike Gibbons, his mother Emma and his cheque from the ELMC

On Wednesday 25th January 2017, the Worshipful Master of the Lodge of Merit, WBro Mike Gibbons, assisted by WBro Gerry Russell, a member of the Lodge and also of the ELMC Grant Making Committee, visited the Knowles family home and were delighted to be able to present a cheque for £2,000 to Emma and Reggie. In the 300th birthday year of English Freemasonry, this is a fine example of our active involvement in supporting deserving causes in the wider local community.

In researching Reggie’s condition and available treatments, Emma has become very knowledgeable about plagiocephaly and is intending to put that knowledge to good use by establishing a support network for families facing similar challenges.